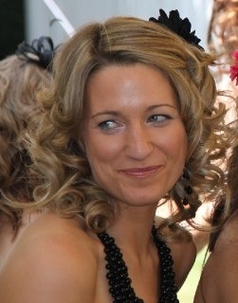 I was a painfully shy, awkward teenager with unruly hair. I didn’t have many close friends. My twin sister went to the same school, but she hung around with her own set of friends. My second oldest sister was 2 years above us.  I was relatively good at sport and so spent most of my lunchtimes playing hockey, netball or tennis so I didn’t have to walk around the school yard on my own.  That or I hid out in the library. I hated school and felt so self-conscious and lonely.

I knew from the age of 14 that I was attracted to some girls, but I also had similar feelings for boys so didn’t at that point identify with being gay. I remember I had a crush on a girl in my Maths class; I didn’t ever speak to her as she hung around with a totally different friends group.  Good job as I went bright red if she even walked passed me. I was desperately trying to fit in, and wanted to be popular.

I think another confusing thing for me was that I didn’t identify with any of the lesbian stereotypes that I was aware of at that time. I didn’t want short hair, and didn’t really fancy any girls with short hair. I think I was certainly a little homophobic, but I was scared and felt I didn’t fit in with any group.

"The next day it felt strange that I had told someone; relief
in a way but also unease that my secret was now out and I
didn’t know if I was ready to let the world know."
My friend went back to Liverpool where she was at university and we didn’t really catch-up again after that. I was bitter for a long time as I felt my friend had abandoned me when I needed help and support the most, but looking back now, we were in the first year of university and our lives had dramatically changed, she had her own relationship issues and had been dating a guy who turned out to be married, but she had fallen for him.

Back at university I was having a great time; I felt free, had made some great friends and was having fun for the first time in ages. I became best friends with a girl called Amie. Although I was living at home and commuting in each day (yet another long story but I also began to suffer panic and anxiety attacks), I still went out to the students union with everyone and would stay over at Amie’s Uni house. Amie was dating one of the bouncers at the union, so we went out quite a bit. It was at this time that I started to feel more comfortable in my own skin, and I decided I would tell Amie that I was gay. You can’t know how these things are going to go, but I was pretty confident that she would be fine with it and I was right, she was great.

I had my first kiss with a girl at university, but I was far too shy and didn’t really dare to progress this any further. It was like I was a teenager again going through the early dating traumas, but this time I got butterflies and was nervous when went on dates. I also learnt the heartache of being dumped!

After university, I continued living at home and got a job working locally, this wasn’t great for my social life, I was never going to meet a girl who was gay at home, and so I started to go on dating sites on the internet. My family still did not know at this point that I was gay. I got talking to a girl from Swansea; she was hilarious and seemed a really friendly person. After a couple of months we agreed to meet up. I drove down to Swansea to see her – It seems crazy thinking about it now!!! I had a fab weekend and not only met Claire but also one of her brothers who was also gay. This really opened my eyes and I realised that being gay wasn’t something to be ashamed of. Although I was attracted in Claire we didn’t date – the commute from Cheshire to Swansea was a little far, but we remained friends.
I was really nervous about telling my mum, as I really didn’t know how she would take it. She was older than most of my friends mums and was of a different generation. Whenever there were two women kissing on the TV, she always let her disgust be known “yuck, turn that over”.

I remember being very nervous, we were sat on the sofa watching the TV, chatting away as we often did, with a glass of wine on the go. All I could think in my head was I am going to tell her tonight, just need to find the right moment. I drank my first glass of wine down quickly, and continued to top my glass up for Dutch courage. Eventually after about an hour and a half I decided I just had to go for it. I started off in the same  type of voice that you’d use when you want to borrow money “Mum...I’ve got something to tell you” she answered yes what is it? I remember saying “please don’t be cross with me, but I am gay, I am really sorry.”  I think she was certainly shocked but after a couple of seconds to take in the information she turned to me and said “don’t be daft you have nothing to be sorry about, I am glad you have told me”.

I went to bed not long after that I was emotionally exhausted! As soon as I woke up in the morning I remembered the previous night’s events and was a little embarrassed about going down stairs and facing my mum in the cold and sober light of day. I crept downstairs and into the kitchen where she was making breakfast, there was a little awkward moment, then my mum proceeded to ask how I had slept and did I want a cooked breakfast as she was making one for herself.  It was like any other day and it was such a huge relief! Things just got better from then on, my relationship with my mum grew stronger, and I was able to confide in her much more, and share how I was feeling.
HTML Comment Box is loading comments...
Click here to return to May's Stories