When my brother came out my mum was devastated. I remember the morning he told her. He’d said to her that he wanted to tell her something, but before school wasn’t the right time. We were 16. My mum panicked and couldn’t wait until after school to find out what my brother wanted to tell her. I had only found out a couple of months before when his boyfriend had told me over MSN messenger that they were seeing each other. They argued, I remember thinking we were going to be late for school, then mum was going through possible scenarios.

She’d asked whether he had hurt someone, whether he’d got someone pregnant. Of course the answer was no to each. Then it dawned on her. She just said, “please don’t tell me you’re gay”.

Now this was in the year 2000, so I can’t remember exactly what happened next, but I didn’t hear him say anything and I just heard the bathroom door close, lock and then Mum screaming. Things weren’t the same after that; Mum found it hard to accept that he was gay and wouldn’t pick him up when he’d been out (we lived in the country so getting around was hard if your parents refused to come pick you up after you’d been out to see friends). Over the next few years, my bro was out and proud.

"I had things going on in my own life. Mainly being bullied at school and then being sexually abused by a school teacher. When I finished at school, I moved to Edinburgh and found the strength to go to the police about the abuse."

Eventually, after interviews and a court case, the teacher who abused me was charged and sent to prison. After that, I started the process to heal from the abuse and bullying that I had gone through. Part of that was me wanting to feel different from other people. I didn’t want this feeling of disgust and wanted to be like everyone else. So I put being gay to the back of my mind; I just wanted to be accepted. I also didn’t want anything to do with sex or guys. To me, I associated being gay with what the teacher had done to me and didn’t want to feel dirty again. If I could just convince people I was straight and not do anything with anyone, I wouldn’t feel disgusted with myself again. That's what I thought anyway. 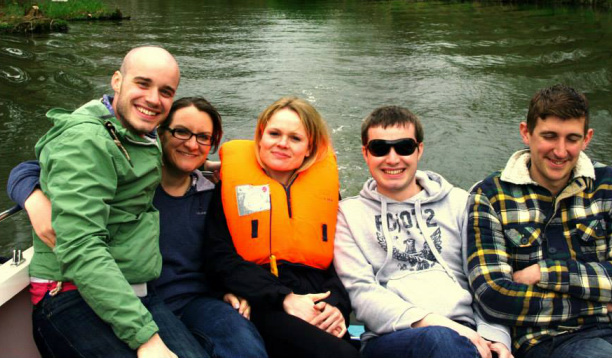 Meanwhile, Mum had become more accepting to the idea that my bro was gay. She had stopped with the cold shoulder treatment and their relationship was back to where it had been before he’d come out.

I spent three years in Edinburgh at university and had all but failed to try and fit in with straight guy friends. I didn’t really fancy women and felt threatened and uncomfortable around guys.

Therefore many of my friends were women and everyone assumed (but kept it to themselves) that I was gay. I had a secret fling with a guy from Edinburgh university and I hated keeping it quiet and feeling dirty after each night we’d spend together.

"I felt so mixed up. It was the first time I felt like I was being myself, but feelings of being wrong and thoughts of the abuse I had experienced at school served to cause me huge conflict."

Also, the idea of admitting to everyone that, yes they were right all along, that I was gay, seemed too much. I was scared, I didn’t want to admit I was different to my friends or that I’d been trying to hide things from them.

After three years of university I was almost bankrupt. I moved home to work for a year to clear debts and go back to complete my fourth year without any financial stress hanging over me. During that year, I had a couple of different jobs. One of them at a local hotel in the restaurant and behind the bar. I remember one night having a drink with a barman, one thing led to another and he admitted to me that he was bi but didn’t know what to do. I admitted to him that I fancied men and that I hadn’t told anyone either. After spending the night together, something changed for me.

I didn’t want to keep on trying, and failing, to pretend that I was someone I wasn’t. Feeling like people were sniggering behind my back, talking about whether I was gay or straight, etc. I remember telling people what had happened. To my surprise, nobody was particularly that bothered. I saw their reaction and thought to myself, maybe being out as a gay man may not be that bad after all. Although, still getting over feelings from abuse in my earlier life, it helped to see that actually, being gay wasn’t disgusting like I had associated it with. The feelings inside me, of being gay and not letting myself be with someone were beginning to sort themselves out. I started to reason with myself, my brother was gay, I didn’t think the relationship he had was disgusting or abusive in anyway. So why was I being so hard on myself?

"We’d been seeing each other for about eight months before I felt ready to tell my friends that I was in a relationship - with a man. I told my closest friends first and then told my brother."

Unfortunately my brother didn’t take it so well. He thought, because I was seeing a teacher, I was replicating the abuse I had suffered when I was younger. Although he’s over it now, and has apologised, his reaction set me back a little in coming out fully to my family and friends. I eventually told my mum when I was 22 - she took it better than when my brother told her he was gay. She didn’t act upset, but didn’t mention it again for years after my boyfriend and I split up. So she never met him, which was a shame. She never met the guy who helped me feel it was ok to be gay, and help me keep on the road to where I am now.

After returning to Edinburgh and completing my final year, I went to Carlisle to train as a teacher. Spending the year apart while I was in Edinburgh and then a further year in Carlisle proved to much for my boyfriend and I, and I finished the year in Carlisle single. While in Carlisle, it was the first time I had gone and met people and was open about being a gay man. I was lucky to be able to do that - I was able to meet people who knew nothing about my past and try out being gay in a place where no one knew me.

I wasn’t completely comfortable, but it was a stepping stone to getting to where I am now. Nobody was bothered, really, I mean I had a few comments or straight guys staying clear of me, but on the whole it didn’t matter one jot as to whether people were friends with me or not. It didn’t cloud their judgement and I was beginning to feel ‘normal’. The only thing was there weren't many gay people in Carlisle so I pretty much stayed single for the rest of the year!

"Yes it's tough. They’ll be tears, you’ll be scared, you may lose people - they might come back, they might not. But it’s your life and no one else’s and being gay is no reason for you to live a lonely life. Get out there and live. I did, and wish I had done it earlier."