It was in high school when I knew I didn't feel as strongly towards having a relationship with girls and didn't dare think of having a relationship with a guy so I resigned myself (mistakely) to thinking that I was probably bisexual, but as time went on I’d 'grow out' of it. I'd been called gay here and there over the years but no real bullying. I avoided anything that I thought would give people any hints - I hung around with the lads, I pretended to like sports and didn't discuss all the CD's I owned! I tried to be the stereotypical Aussie Bloke and avoid anything that was stereotypically gay.

My only knowledge of being gay was seeing the Sydney Gay & Lesbian Mardi Gras and the US version of Queer as Folk.

"After school I went straight into working in the hospitality industry where I found it easier to be myself but still didn't want to admit I might be gay. I decided to stay single and not get involved with anyone (well, not in a relationship sense)."

I thought, if I'm confused I'm going to surely confuse others. My famous line was, "I’m just happy being single and free". In reality I wasn't happy, I just wasn't dealing with my true feelings at all. I considered myself a fake. Looking back I realise that I kept this secret to myself for such a long time.

I'm always told Australia, and especially Sydney, is very gay-friendly because we have the Mardi Gras, but for me it wasn't, especially with three brothers.  The fear of anyone knowing absolutely terrified me! I’ve spoken about that fear to many friends and family since and they all had no idea that was how I was feeling.

My dad passed away quite suddenly at the end of 2004, and I spent much of the next year being there for my mum and three younger brothers. It took away some of my own fears and doubts and made me a little stronger. On my 25th birthday a year later, I decided to move from Oz to the UK. My dad was born in Glasgow so I was able to get a British passport and within six months I arrived in London.

"I had never felt more free in my life - I knew no one and no one knew me."

I guess that was the moment I felt comfortable to admit I was gay and I was able to come out to myself. Over the next 6 months I got a job, a flat share and started dating guys (That’s a whole different story!). I was like a kid in a candy store in Soho or "fresh meat" as I was told I’d be called. I told my first friend and flatmate Mel that I was gay a month or so after I moved in (after I didn’t come home one night), she was fantastic and she said she already knew :) I told my new friends plus some close ones back in Australia over the next few months, each person I told I felt more proud of who I was.

I decided in November 2006 to tell my Mum as I wanted her to know.

So I picked up the phone and called her, we spoke every few weeks so she probably just thought it was a catch up call. I said I had something important to tell her and that she had better be sitting down. She said "OK”. I just blurted out, “Mum I'm gay and I like men not women." There was a short moment of silence then she laughed and said, "Matt, I love you, whoever you like". I said, "Are you sure you're OK?" and she said, "Of course, I love all of my boys”.

I’m not sure what I had expected to hear but it could not have gone any better. Mum later told me that she first thought I needed money or had gotten someone pregnant - we still laugh about it to this day. My mum told my brothers for me, who are between two and 10 years younger than me and funnily enough my youngest brother has accepted it the best.

"I'm still not sure what the other two think but I know they are happy that I’m happy, so that's OK with me."

So I guess for me there were no tears or sadness when I did come out, my memories are actually really happy. Would I have come out sooner if I knew the love and support I had would have been there? Of course. But life isn’t about regrets. I was late to the party but it was worth the wait.

It's weird but this all still feels like yesterday.

Since all of that I've met Rob (the man of my dreams) and married him in 2012  and the UK is now my home. Mum once asked me if I ran away to the UK because I was gay. I said, "No, I ran away to admit to myself I was gay and everything else just followed." 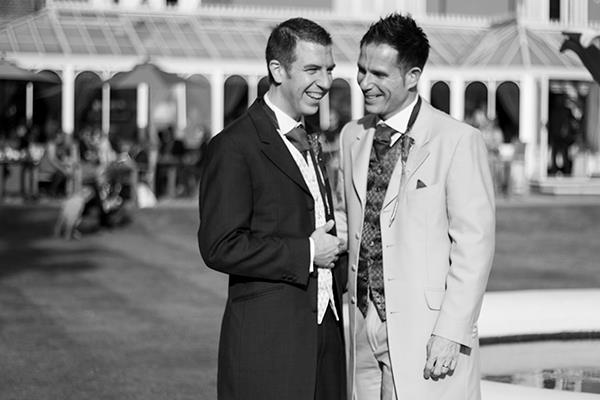