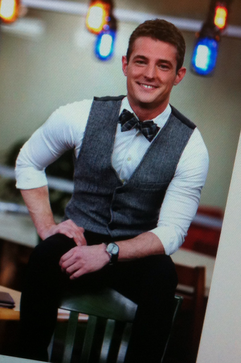 I came out to my parents six years ago this Labor Day Weekend. I decided to tell them before anyone else because I needed their support more than anyone elses in this world. I'll get to their reaction later, have to build up steam right?!

Looking back over the years of my life, I somewhat always knew I was gay. I didn't know what to call it but I knew I was different. When I was growing up, I thought the attractions I felt towards my gender were just a normal thing. I wondered if this was something that everyone at some point feels and those thoughts would go away. Fortunately, they never did. I pride myself on being different and because of being gay, I am the person I am today. It doesn't define me but it's made me a stronger individual.

I always had friends that were girls. I had very few friends that were boys. I always received the sympathy of girls and thought this was just the way it was going to be. When I was a kid, my nickname was 'Bawlbaby'. I cried when something didn't go my way or when I was embarrassed. It was a mechanism so I wouldn't get teased more because it would bring sympathy or make the other person uncomfortable and they'd leave me alone...WIN WIN, right!? Not so much. I was teased all the time.
I don't remember a lot of good times in school. I was made fun of for not being good at sports. I was made fun of for being skinny. I was made fun of for not doing well in school. You name it, I got made fun of. I remember one incident that is burned into my brain. It was my 8th grade graduation and I didn't get my hair cut before the date. My hair was long but instead of just being a 'cool' kid and leave it as is, I combed it over like a 65 year old man trying to cover a bald spot. Needless to say, my nickname from then on was Donald Trump. Not a good memory.

I hated myself and felt that I was a dirty person and no one could ever know about these thoughts. So I started getting very involved in church activities because I knew this wasn't something that God wanted me to be and if I prayed hard enough, I could pray it away. I also knew that this wasn't a healthy lifestyle because I was taught in 6th grade that when a man has sex with another man, he will automatically get HIV/AIDS. I was pretty terrified of being gay. I got involved in one of the most conservative churches to help me pray it away, Assemblies of God Church. Well, that didn't work because I still had these 'awful' thoughts. I graduated from High School never having a girlfriend but thinking I wanted to marry my best friend, Jayme. She was always my date to the prom.

I then started college and what a difference a day makes. I felt so empowered going to college and thought, this is where I'll stop being attracted to men and I'll find the girl of my dreams. I started going to the Church of Christ which is a little more conservative than Assemblies of God. They don't have instruments when they sing and women can't pray in front of men. I thought that weird but also thought, "this church will change me!"

I told my parents first. I knew that I needed their support and I got it. I was terrified. I made a special trip for Labor Day Weekend to Albuquerque where they were living and I remember it being on the tip of my mind the entire weekend. I wouldn't talk the whole time pretty much. Then we were sitting out on the back porch the night before I was going to leave the next day. I thought, 'Now or never'. So I told them that I came in for a reason and I was mostly worried about my Dad's reaction. I knew my Mom wouldn't have a problem because she asked me if I was gay SEVERAL times! Of course I always got super-defensive when she asked but back to the story.

I told them and before I could get the words out, wouldn't you know it, I was bawling my eyes out. I was worrying I'd be disowned by my family, they'd never talk to me again, and tell the entire family that I was a freak. I tend to over-think things. They were amazing! My Mom was sitting there crying with me and my Dad was just quiet for a bit. I remember it vividly. (I'm tearing up as I'm writing this because I'm amazed at how blessed I am with the parents that I have.) I then remember my Dad looking over at me telling me that they loved me no matter what I was. It didn't matter to them. At that exact moment, years and years of guilt, self-hate, and a multitude of other problems just fell off my shoulders. It was like someone took a hundred pound weight off each side of my body, it was an amazing feeling.

"Mom was very excited and happy that I had finally been honest with myself and had the love and compassion to not say, "I told you so!" ;) Love you Mom & Dad!"

So I told my sister at dinner one night that I was seeing someone and his name was Nick. She almost choked on her salad! She was good at acting like she didn't know. I told my best friend Vince lastly because I wasn't able to be there for him like he needed me to when he came out to me and I felt guilty. I told him and it took him a couple days to deal with it but then he took me out on my first "gay-outing!" We decided to do it up big and it was Halloween. Amazingly fun! I've never looked back.

Still to this day, I have never slept with a woman, nor wanted to, and I've only kissed one girl. It was a random event and quite funny in my opinion. I was with a group of my friends and we were at a bar and she asked them if they had all been with girls. They all had and I said I hadn't. She asked me if I had even kissed a girl and I said no. She said, "Well how do you know you're gay?" I said, "You just know ;)"  Then she came up and started kissing me! She was quite the firecracker! She was a gorgeous blond and I was flattered but then she had to ask, "So how was that?" I said, "I miss the stubble!"